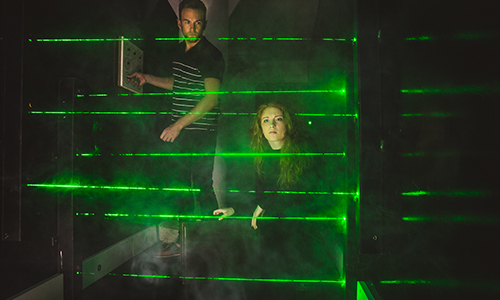 This in the first in our series of Escape room reviews! In addition to recording pretend escape rooms, we also rather enjoy visiting real life ones - so let’s tear them to bits! Also don’t worry, much like your Nan’s 54-reg Honda Jazz, these reviews are spoiler-free.

We’ll start with the first escape room we tried, The Million Pound Heist by Enigma Quests, and an absolutely terrible place to start it was. To save you scrolling to the bottom for the score I’ll give you it up front - it’s an easy 5/5, and every room I’ve been to since has failed to match the lofty bar it set.

The Folks at Enigma Quests task you with breaking in to the safehouse of a gang of international criminals. You’re given a briefcase, some instructions and bam - you’re on your own.

Some escape rooms give the vibe of a charity shop of odds and ends of furniture - quite often because they are. Enigma have gone the opposite way - using high quality props and scenery to thoroughly immerse you. They hit a great balance of giving a room a real feel, while still cramming it to the absolute gills with cleverly concealed puzzles and clues. Everything in the room serves a purpose, either furthering the story (which the narratively curious will enjoy unpicking throughout the adventure) or slyly working in one of the many puzzles.

Tough but fair is the order of the day, with a pleasing variety of interactions at work. The mix of electric, mechanical and traditional puzzles adds flavour - but the real winner is that most of them require you to not only engage with the backstory, but are pieces of the story in and of themselves. By the time you emerge from the other side you may well feel (like we did) that you’re actually ready to rob a place. There are a couple of puzzles in particular that leave you feeling rather Ocean's 11.

A word of warning though, not all of the knowledge you’ll need for the puzzles can be found in the room. Best brush up on your geography.

A standard escape room start, with a flurry of clues and a handful of simple puzzles to ease you in. The difficulty scales up throughout, as does the ‘wow’ factor of the puzzles to a dramatic, frenzied conclusion. You'll start with thinking caps on, and finish with hearts hammering.

£30 a head is at the dearer end of the scale nationally, but comparable to other rooms in London. Money well spent, but there’s cheaper rooms to be had if you’re on a budget.

5/5 Absolutely superb. Enigma are regularly booked up months in advance, a real testament to the quality of a game that's non-repeatable.